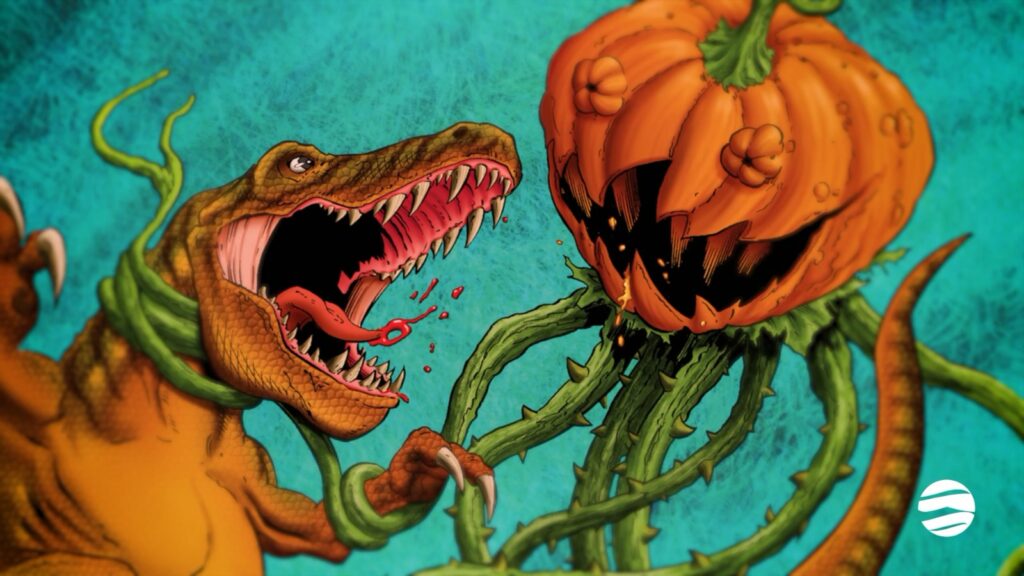 Have you ever considered, y’knowww… there’s not a lot of good pumpkin monsters out there? Well, that’s what Mark McKenna thought one Halloween whilst carving pumpkins with his son.

After 35 years in the comic-book industry, creating for all the great comic titles, Mark conjured up a brave-new world of his own with a whole tribe of orange nasties! Introducing, Combat Jacks…

A marine squad with high-tech weaponry is sent to investigate the disappearance of prison terraformers on the newly discovered planet, Maia. Because of the abundance of pumpkin-like vegetation on the planet, it was deemed habitable by the human race. But soon, our adventurers discover these pumpkins have a horrifying face and a mood to match! You’ll never look and pumpkins the same again…

First released as four separate comic books in physical form, now Combat Jacks appears a in a unique NFT (non-fungible token) collection that brings the complete story together in one space-pumpkin-tastic volume.

The whole collection has received the Terra-Virtua touch, giving you the amazing opportunity to read your digital comic as you normally would and then view it again with the lettering off! Not only that – you’ll also be able to view Mark McKenna’s inks on their own, free of colour, panels, letters and WAAAAAHS!

Even better… the limited-edition Director’s Cut lets you go deeper – all the way down to the pencil drawings underneath. How stupefying-ly awesome is that? 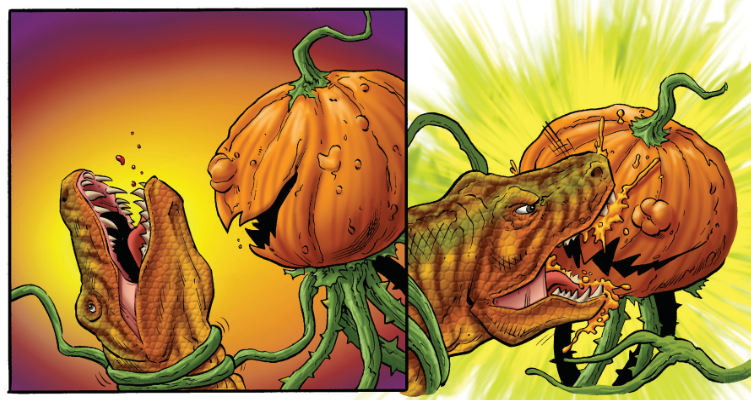 Mark McKenna – the Man Behind the Legend

In a career that started in 1984 at Marvel Comics, Mark McKenna has wowed generations of fans with his incredible art talent. Four decades in and with bucket loads of all-time favourite characters to his name (Spiderman, Batman, Green Lantern, Darth Vader…) he still squirms at being labelled ‘a legend’.

When we had the chance to speak with Mark recently, he was keen to point out that he’s just a regular guy, who still picks up after his dog in the yard! During our chat, we took the opportunity to ask him about his inspiration for Combat Jacks, so over to you, Mark…

Where did the idea for Combat Jacks come from?

I was thinking about Halloween and how there’s not a lot of good pumpkin monsters. My son and I just bounced around some ideas and came up with aliens! Alien pumpkins, indigenous to another planet with the same climate as Earth, on the other side of the solar system. Humans are trying to terraform this planet, preparing for Earth’s overpopulation in the future. And it all started coming from that.

If you were a comic store owner and I was a customer, how would you describe Combat Jacks?

Combat Jacks to me is a homage to the 1950s rubber-suited science-fiction movies that were on TV when I grew up. All the classic black-and-whites, The Thing From Outer Space, It Came From Beyond… When I was 7 or 8 years old, these monster movies scared the bejesus out of me! But I’ve seen them more recently and just laughed at how afraid I was – it’s just ridiculous. I mean you can see all the rubber and styrofoam!

Combat Jacks was always a throw-back to that 1950s thing. Y’know I can totally see them making a movie with a styrofoam jack-o-lantern, it totally excites me.

So, that’s how I would sell it, and to me, if you’re not into those stories that go on for years, with this you get in, there’s humans fighting monsters, you get out and you’re done!

As well as monster pumpkins, we noticed that Combat Jacks has a very special Halloween touch…

Yes – the foreword for the collection was done by John Carpenter’s wife, Sandy.

John Carpenter was a big influence on me growing up, with Halloween, The Fog and all those movies. So having his wife write the forward for Combat Jacks was kind of a pinch-me moment.

And in the words of Sandy Carpenter, we’ll finish by saying, “…if you just love an adventure with insanely ridiculous evil aliens, then you will have a ball!”.

WORD TO THE WISE: All of our Director’s Cut comic collections have SOLD OUT within hours of launch. If you are considering adding a Director’s Cut to your NFT collection, please act fast. Good luck!

It's Time to Mash Some Pumpkin Foe!